It took him 50 games, but Javier Baez finally did something he hasn't done yet this year: Win his first Superhero award of the season.

Share All sharing options for: Cubs Heroes and Goats: Game 160

The funniest part of the balk play that Al mentioned in his recap was listening to the Brewers announcers on the Fox Sports Wisconsin feed as the play occurred. Theories of Anthony Rizzo colliding with the first-base umpire came into play and they had no idea why Rick Renteria was so upset.  It took them until the top of the ninth to finally figure out what actually happened. Apparently they don't look have a replay view that shows the second-base umpire in the shot because it would have made their jobs a heck of a lot easier.

Graphs for Game 160 (courtesy of Fangraphs): 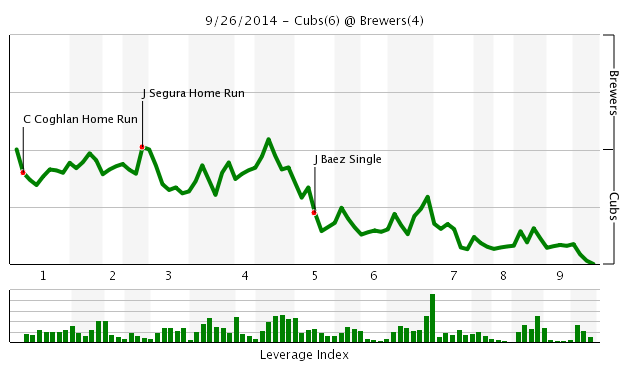 UPDATED RANKINGS THROUGH GAME 160 (Changes in Bold, Notations Below):

Baez finally enjoys the view from the top of the Hero podium, while Alcantara sinks into the dreaded minus-20 territory on the plus/minus chart.