With one game left in the season, Anthony Rizzo climbs into uncharted territory that was uncertain to be seen this season.

Share All sharing options for: Cubs Heroes and Goats: Game 161

I have to wonder, with Anthony Rizzo now at 86 points on the Hero chart, whether or not he would have broken the 100-point mark had he not been injured. My guess is that he would have made it. Maybe next year he'll get there.

But he did break another barrier this season. More on that below.

Graphs for Game 161 (courtesy of Fangraphs): 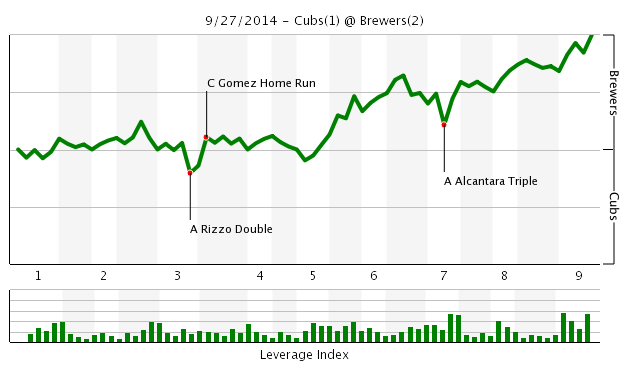 UPDATED RANKINGS THROUGH GAME 161 (Changes in Bold, Notations Below):

Valbuena and Soler slide down on the plus/minus chart, while Jackson manages to push himself out of minus-30 territory.