And as the 2014 season comes to a close for the Cubs, who better to be standing at the top of the Hero podium than the man who had been there so many times before.

Share All sharing options for: Cubs Heroes and Goats: Game 162

So that's it. Another season in the books. The Cubs exceeded my pre-season expectations by a decent margin, as I had them pegged at 95-plus losses from the outset. I'm very glad that they proved me wrong, and I hope that in 2015 they'll find a way to get back to at least .500, something that they haven't done for an extended period of time for the past five years.

I'd like to thank everyone who came by to read this piece every day or on a regular basis. I hope that you found it to be a fun way to look at the season from a slightly different angle. And rest assured, this series will be back again in 2015.

Enjoy the offseason. It's only 189 days until Opening Day.

Graphs for Game 162 (courtesy of Fangraphs): 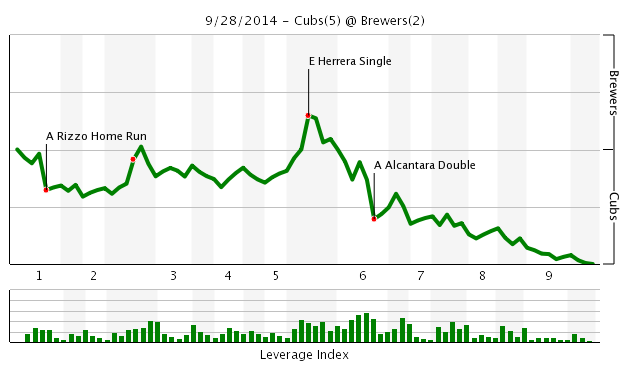 FINAL RANKINGS FOR THE 2014 SEASON (Notations Below):