The Cubs got really good pitching throughout the series in Washington, and Jason Hammel looked like he'd be worth far more than the money spent on him. It was his second excellent outing in a row.

This was about the time that Joe Maddon began tinkering with the closer role. Hector Rondon walked the first batter he faced in the ninth -- gone! Pedro Strop came in, allowed a run to score, but finished with the save. It wouldn't be the last time Maddon would do this.

The Cubs were 29-25 after this win, still in third place half a game behind the second-place Pirates and seven games in arrears of the Cardinals.

Jason Hammel, I think, will be headed somewhere around the All-Star break. Not in a trade, as he was just before the break a year ago, but to the All-Star Game itself in Cincinnati

Hammel was outstanding again Saturday, allowing just four hits and two walks in eight innings and the Cubs defeated the Nationals 4-2, giving themselves a chance to win the series Sunday afternoon.

The two walks was, in fact, a bit unusual for Hammel. He had walked more than one in a start just once this year prior to Saturday, a three-walk game vs. the Brewers May 8. His nine walks in 75 innings this year gives him a walk ratio of 0.93 per nine innings. His WHIP of 0.893 leads the National League. The last Cubs pitcher to lead the league in WHIP was Warren Hacker, who had a 0.952 WHIP in 1952.

Meanwhile, Joe Ross, who was making his big-league debut for the Nats, put down the Cubs in order through the first three innings. One time through the batting order was apparently enough for Cubs hitters, because they came out hitting immediately upon the fourth inning commencing. Dexter Fowler, Anthony Rizzo and Kris Bryant all singled, producing a run, and in the fifth, Jonathan Herrera led off with a single and took third on a pair of ground outs, when Fowler singled him in. Ross didn't pitch badly for a kid who hadn't thrown above Double-A and he clearly has talent, but he looks even younger than his 22 years with a cap that's about two sizes too big for him: 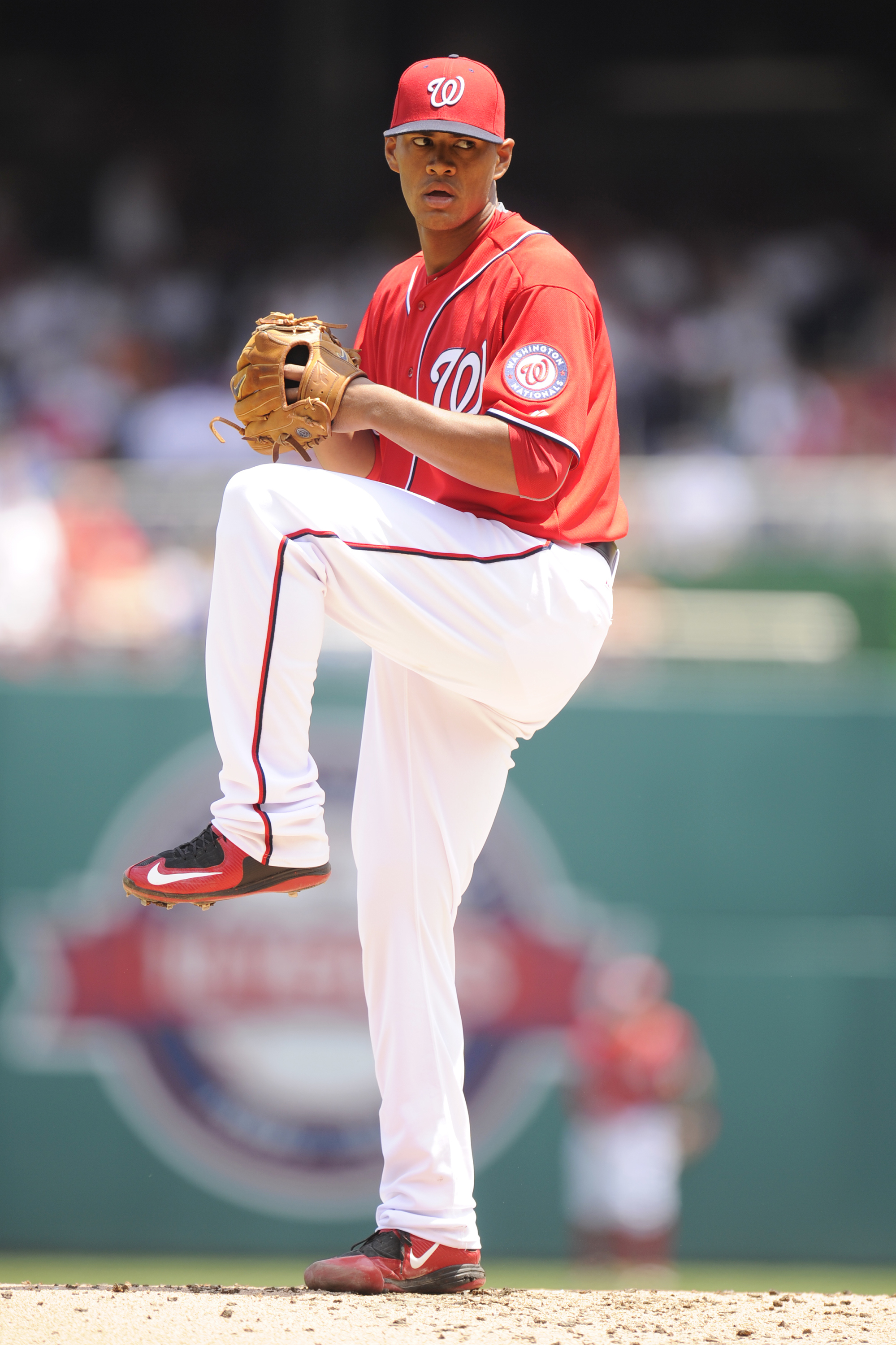 The Cubs didn't generate much offense, just seven hits and a pair of walks off Ross and two Nats relievers, but with Hammel's dominating performance it was enough to win the game. Besides Fowler's two hits, Rizzo singled and doubled and raised his batting average to .330. Herrera blooped a single into center field in the ninth inning to give Hammel and the Cubs an extra cushion.

Maddon gave Hammel a chance to finish it, but Bryce Harper homered to lead off the ninth, which brought Hector Rondon into the game. Rondon immediately walked Anthony Rendon, continuing some of his control and command struggles, and Joe Maddon didn't wait, calling on Pedro Strop. Even though Strop wild-pitched Rendon to second, he struck out two of the three hitters he faced, including Ian Desmond to finish it. It was Strop's second save of the season.

Rondon's struggles are somewhat inexplicable, as he didn't have this problem last year. It could increase the Cubs' interest in free agent Rafael Soriano.

As many of you know, I have often been critical of Theo & Co., though certainly not in the way they've put together this year's team, nor for the fine farm system they have developed. But I wanted to say that identifying Jason Hammel as a pitcher who could help them in a number of ways is a credit to the entire baseball organization, from Theo on down to his scouting staff. First, they found him basically on the scrap heap, coming off a mediocre year for the Orioles. Then, he had a good enough year that they were able to trade him in a deal that brought real value to the Cubs, and he evidently liked it enough in Chicago to return on a reasonably-priced two-year contract.

The win evened up the Cubs' record on this road trip at 3-3 and they have a chance to win the series, as well as the season series, against the Nationals if they can win Sunday afternoon's affair. Just so you don't get lost in this weekend of weird start times, tomorrow's begins at 3:05 CT. Kyle Hendricks will take the mound against Jordan Zimmermann.