I'm going to go on a bit of a rant here, so fasten your seat belts.

The Cubs announced that Wednesday's scheduled game against the Milwaukee Brewers was postponed due to, according to their press release, "the forecast for inclement weather throughout the remainder of the evening."

This release was sent at 6:11 p.m., about an hour after the gates opened.

This weather forecast was known ... well, yesterday. Rain was expected to begin by early afternoon and continue all evening. As it turned out, it didn't start to rain in the area around Wrigley until about 3:30, but once it started, it didn't stop.

The Cubs did the right thing by calling off this game... but why didn't they heed the forecast and call the game off early in the afternoon? In doing so they wouldn't have had all the gameday employees come in -- for which they have to be paid -- and wouldn't have inconvenienced the small number of people (like me) who did get to the ballpark. You might say they made up for paying the employees with beer and concession sales... but I'd say there were no more than maybe 2,000 or so people in the park when the game was called, so I can't imagine food sales were too brisk, although I did have something to eat myself.

And therein lies another tale. I was just heading back to my seat when one of the security folks I know told me the game was called. Checking Twitter, I saw that a number of the beat writers had sent out this information, just about the same time the Cubs' release was emailed.

But at the ballpark? No PA announcement, and it took a good five minutes (during which time I was gathering my stuff to leave) before they put an announcement on the video boards that the game was postponed.

I'm glad this game was called. It would have been risky to wait, then send Jake Arrieta out to start and then potentially have the game delayed, in which case his outing could have been wasted. But I do think the Cubs should have been more proactive about the forecast and called the game earlier.

There hasn't been any makeup date set, so if you had tickets to this game, the Cubs say you should keep them for use whenever it's rescheduled. The teams have a common off day Monday, August 15, just before the next visit of the Brewers to Wrigley Field. The Cubs are in the middle of a homestand and the Brewers are just finishing one up, so this should be logistically easy once the Players Association signs off on having the Brewers play on more than 20 consecutive days (it wouldn't affect the Cubs, who have off days on August 8 and 25).

I presume the weather will be nicer by then.

The Cubs have already announced that Jake Arrieta will start Thursday's game; no word from the Brewers on whether tonight's scheduled starter, Taylor Jungmann, will go, but I'd guess that's likely.

Finally, in the comments of yesterday's recap a photo of a couple of guys playing fastpitch on the outside of the old, pre-2005 bleacher wall was posted. I mentioned I'd try to take a photo from that same spot now, and before today's rainout, I did. Here's what that angle looks like today:

And, here's the earlier photo for comparison. 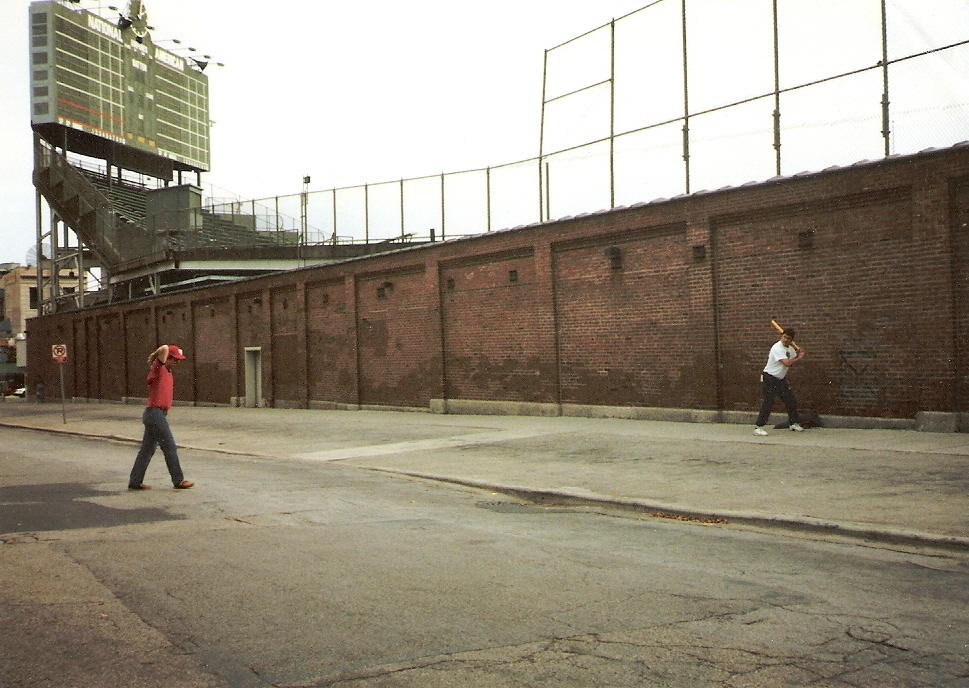