The Cubs go for yet another series win.

Kyle Hendricks accomplished something Saturday and he didn't even have to pitch to do it.

Clayton Kershaw had been leading the major leagues in ERA, even though he's been on the DL for several weeks, because he had thrown 121 innings in his 16 starts with a 1.79 ERA. You need to throw a minimum of one inning per game your team has played to qualify for the ERA leaderboard. The Dodgers played their 122nd game Saturday, so Kershaw no longer qualifies. Thus Kyle's 2.16 ERA is now the best among qualified major-league pitchers.

Keep up the great work, Kyle. His next start will be Wednesday in San Diego.

And, here's an interesting random factoid about the Cubs:

The #Cubs have used 91 different pitchers (includes 5 position players) on the mound from 2012-present. Only the #Braves (92) used more

Of course, most of those pitchers ran through the roster in the rebuilding period, 2012-14, although this year's Cubs have used 25 different pitchers, including position player Miguel Montero. The other four position player Cubs to pitch since 2012: Joe Mather, John Baker, David Ross and Chris Denorfia.

Here is today's #Cubs starting lineup for the rubber game in Colorado. 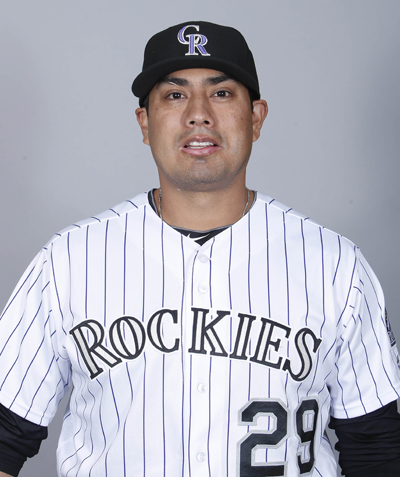 The complaint department door is shut tight and locked regarding Jason Hammel, who's having the best year of his career. Since the All-Star break: 0.95 ERA (best in MLB), 0.895 WHIP, opponent BA .172 in six starts covering 38 innings. Hammel pitched for the Rockies for three seasons (2009-11) without much success, but last year's version had a good game in Coors Field, April 11, 2015 -- six innings, three runs, no walks, eight strikeouts. He did allow a homer to Nolan Arenado, but so have a lot of pitchers.

Jorge De La Rosa is not having a good year -- higher ERA and WHIP than last year, K rate down, walk rate up, spent some time on the DL with a groin strain. Since the All-Star break (seven starts): 4.58 ERA, 20 walks in 39⅓ innings. The last time he faced the Cubs was July 27, 2015 at Wrigley Field and they hit him hard there -- five hits and six runs in 3⅔ innings. I'd like another one of those please.