The Cubs seek their eighth win in a row tonight at Wrigley Field.

If the Cubs had stayed on-rotation, today would have been Jason Hammel's turn, coming off the bereavement list.

By pushing Hammel back to tomorrow, the Cubs accomplish two things:

It should be mentioned that this is likely the reason the Cubs slotted Brian Matusz in for his one-and-done Cubs start on July 31. Since the Cubs won that game (not because of anything Matusz did), it worked out. Somehow, things seem to do that for this year's Cubs. Incidentally, Matusz cleared waivers and the Cubs sent him outright to Iowa, so he's still in the organization.

Happy 27th birthday to Jason Heyward. Hopefully, this milestone will do something to trigger a good final seven weeks of the season. (Yes, I'm reaching.)

Heyward turns 27 one day after Anthony Rizzo, who was able to celebrate his birthday on a Cubs off day, riding a seven-game winning streak. You might remember that Rizzo gave David Ross a Father's Day card back in June. Grandpa Rossy got back at Rizzo with a birthday tweet. In case you missed this in Cub Tracks this morning: 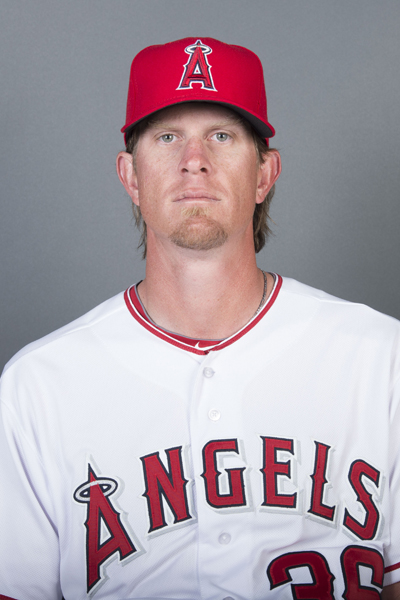 John Lackey pitched for the Angels for eight seasons and he and Jered Weaver were teammates for four of those years, three of which were playoff seasons (2007-09). Lackey pitched against the Angels six times when he was with the Red Sox from 2010-13, the last time three years ago, July 7, 2013. It says a lot about the Angels that the only players left on their team from that game are Mike Trout and Albert Pujols -- and Weaver, who started that game for the Angels and outdueled Lackey. The Angels player who's faced Lackey most is Yunel Escobar (11-for-30, .367, three doubles).

Jered Weaver used to be really, really good. The velocity on all his pitches has been dropping for at least four years, and his fastball now clocks at an average speed of 83.7 miles per hour, which is... well, let's just say that if he weren't still under contract for $20 million, he probably wouldn't be in the big leagues. He's allowed 23 home runs in 123.1 innings this year, his K rate is a pretty awful 4.7 per nine innings, and his ERA has not been below 5.00 since May. In short, he's reaching the end of his career, and the Cubs should be able to hit him hard.

Ben Zobrist has seen a lot of him: 8-for-27, three doubles, a triple, a home run. That's the kind of thing we're likely to see more of tonight.