The Cubs seek their sixth straight win over the Brewers.

One more note from Sunday's game:

Another fun fact about Kyle Hendricks' great season: he's allowed three earned runs or fewer in 18 consecutive starts, which is the longest such streak for anyone in the major leagues this year.

So in addition to everything else he's done this year, he's a bullpen saver. Hoping for more of the same this afternoon.

Bizarre Brewers stat of the day:

I mean... that makes no sense at all. Hopefully Cubs pitching can shut him down this series. 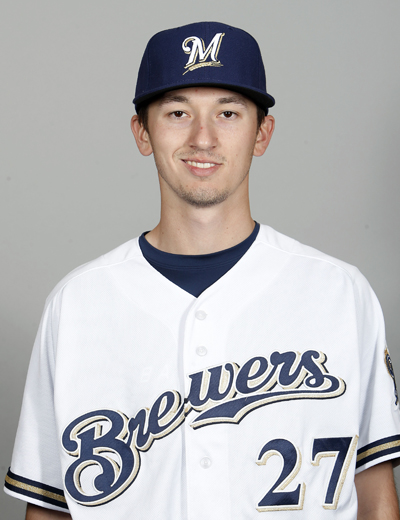 Kyle Hendricks since June 19: 1.27 ERA, 0.961 WHIP, .202 opponents BA in 14 appearances (13 starts). He was named N.L. Pitcher of the Month for August, when he posted a 1.28 ERA, 0.780 WHIP and a .179 opponents BA in six starts. He hasn't had that good a go against the Brewers this year, though: two starts, 4.35 ERA, and he got hit pretty hard May 17 at Miller Park. Jonathan Lucroy homered off him, but Lucroy's gone now, and in his career overall Kyle has been very good against the Brewers (2.08 ERA in eight starts). Hopefully Kyle's great second half continues.

The Cubs hit Zach Davies hard August 18 at Wrigley Field: seven runs in four innings, including a homer by Kris Bryant. But Davies shut the Cubs offense down July 23 at Miller Park: one run in 6⅓ innings. Which Davies do we get today? The August version, we hope.

Today's game is on WGN. For affiliate information in the Illinois/Indiana/Iowa Cubs TV market click here. It's also available nationally on ESPN (outside the Chicago and Milwaukee markets).