A number of you have posted comments here asking about Wrigley Field construction updates, a staple of the offseason here for the last five years. I’ve also received a number of emails asking about the 1060 Project, the official name of the Wrigley Field renovation, restoration and expansion project.

The 1060 Project is now complete, except for a few interior and “punch list” items, as well as some work to be done in the press box. Cubs spokesman Julian Green told me by email:

The 1060 Project is completed. Through a gargantuan effort working through Chicago’s unpredictable winter weather, post-season baseball, meticulous landmark features and vast logistical challenges with expanding and renovating a 100-year-old ballpark within a neighborhood, the Ricketts family accomplished their goal of successfully preserving and and modernizing Wrigley Field for another 100 years.

We are planning to renovate the press box this offseason.

I concur with Julian Green. The project was carefully thought out with a view toward not just renovating a ballpark that had admittedly become somewhat tired, but to restore the park to what were considered its “glory” years, the 1930s. Many photos of Wrigley Field from that era were pored over in order to restore the best features of the ballpark in that era, including modern representations of ironwork that had wrapped around the park and the terra-cotta look over the entrance and along Clark and Addison Streets.

In this, the Cubs succeeded beyond anyone’s dreams, I think. Wrigley Field was always a neighborhood gem, even when neglected for years by previous ownership, but the 1060 Project begun by the Ricketts family in 2014 at a cost of well north of $500 million has made it a jewel of Major League Baseball. Modern video boards have been well blended in. New seating has been added, as well as high-end clubs that high rollers appear to desire in 2010s baseball. A state-of-the-art clubhouse was constructed underground along with new workout facilities, perhaps the best player facilities anywhere in the big leagues. A large office building is now facing out onto a plaza dubbed Gallagher Way, where there are events both on game days and other days, integrating the plaza into the neighborhood.

I like every bit of what the Cubs did, save one thing I’ll get to in a moment. It has brought Wrigley Field into the 21st Century without ruining its charm, sightlines or intimacy. Cubs Chairman Tom Ricketts once told me, “Wrigley Field is not a museum,” which to me meant that he understood the history but that the ballpark couldn’t just stay the way it was in the 1980s. The Cubs couldn’t compete with the other 29 teams with an antiquated facility for players, fans and media. Now they can.

The only part of this work that I didn’t care for was the movement of the bullpens underneath the bleachers. I absolutely understand the reasons for the move — and let’s be honest, it wasn’t all about player safety, though that’s certainly an important part of it. It was also about adding about 500 high-priced seats along the foul lines. I miss seeing the pitchers in the bullpens on the field, their occasional antics and their ability to occasionally interact with fans. Still, that’s one small thing in a project that has completely succeeded, as Green noted, preserving and enhancing Wrigley Field so it can last another century.

Here’s a comparison between how Wrigley looked with the bullpens on the field, and then after they were removed. The “before” photo was taken September 18, 2016; the “after” on April 16, 2017. 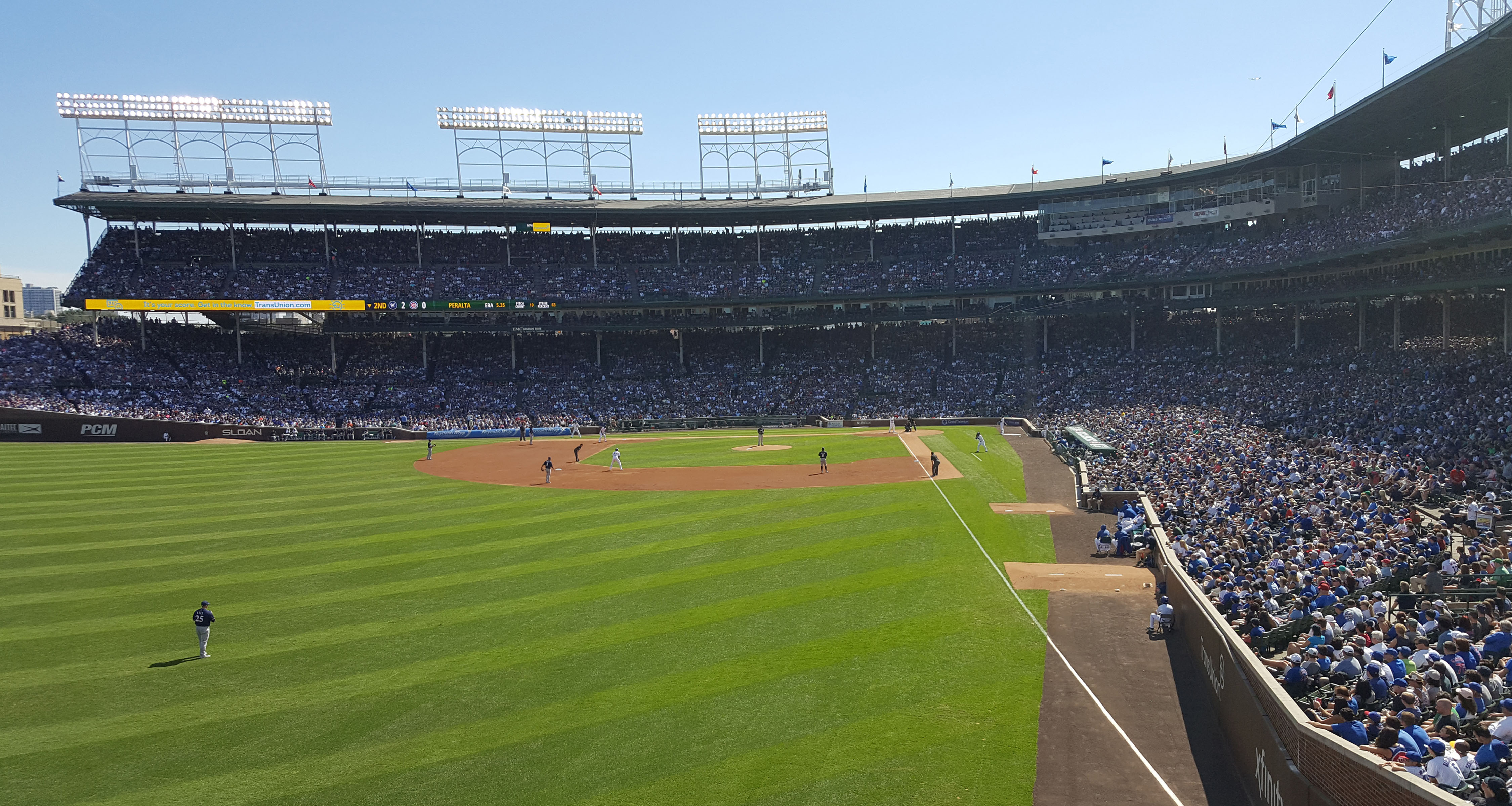 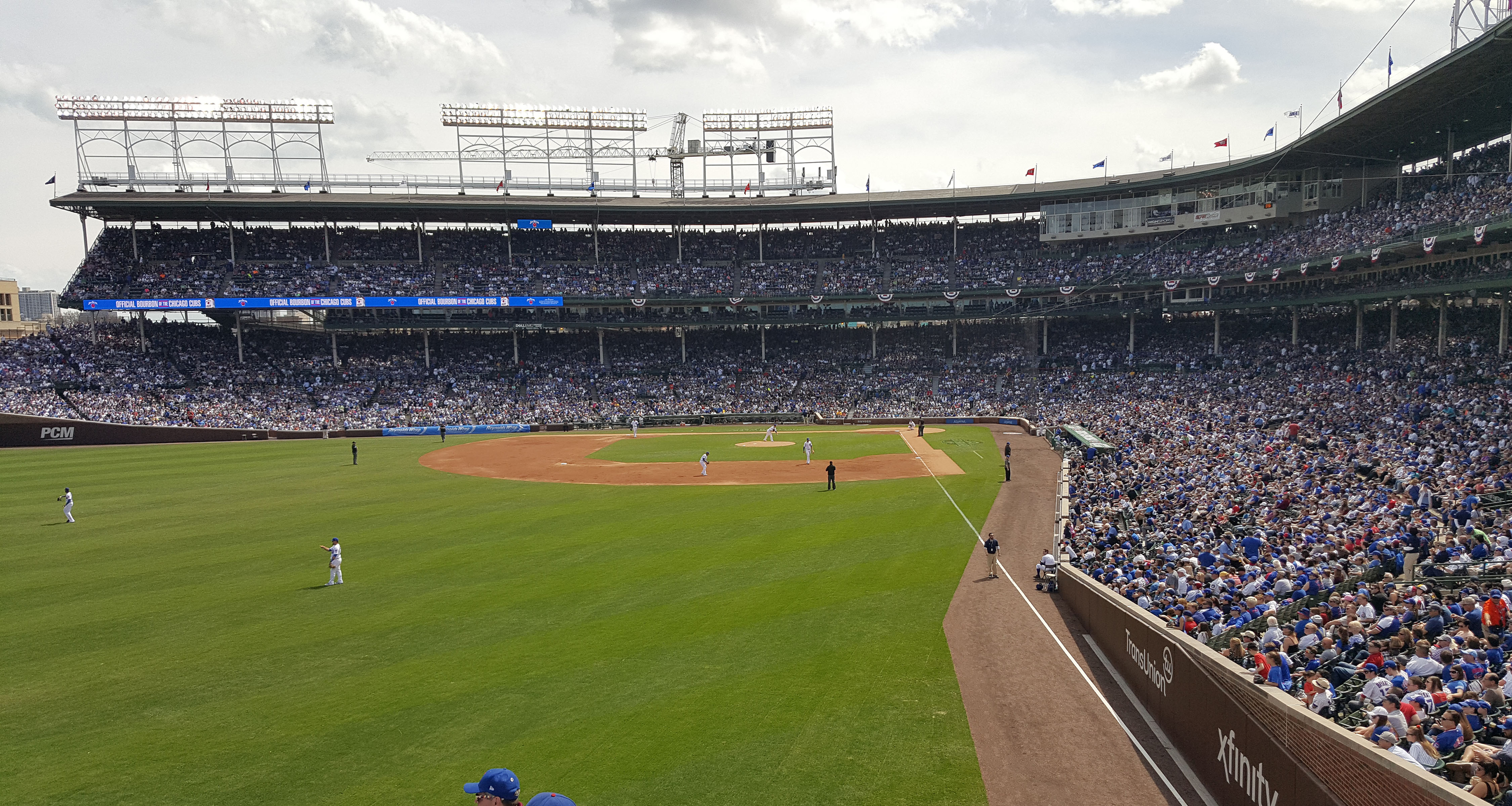 Work being done this winter includes the press box, which dates to 1989 and badly needs updating. That, of course, won’t be visible so there won’t be any way to post photos here. I have included here three photos from the current press box (photos 2, 3 and 4) that I took while there during the season-ticket holder day a couple of weeks ago.

Eventually, as I was told last spring, the lighting at Wrigley Field will be changed to LED lighting, though I do not know when this might happen. The Cubs also stated last August that they would be installing extended netting at the ballpark, though I have heard nothing about it since then.

Thus this is the 620th and final installment in this BCB StoryStream which contains every article I’ve written here about the 1060 Project all the way back to 2010, when renovations to Wrigley Field were first proposed by the then-new Ricketts family ownership. You can also read all the Wrigley renovation stories in this BCB section.

The photos in the gallery at the top of this post were all taken by me today, Thursday, November 21, 2019, except as noted.

The website Building and Construction gave a “Platinum Award” to the 1060 Project and you can read quite a bit of detail about the project and how it was completed here.

I would like to publicly thank David Sameshima, Mike Bojanowski, Danny Rockett and Sara Sanchez for going to Wrigley Field over five offseasons — sometimes in horrendously cold weather — to take photos of the work as it was in progress when I couldn’t do that myself. I’ve considered doing some kind of photo retrospective, but that would mean going through literally thousands of photos and/or hundreds of posts to choose the best images. That would be an enormous undertaking. For now, you can scroll through the photos at the links above.

Thanks for reading as we chronicled the 1060 Project, from conception through battles with the city to actual construction. Truth be told, I’m going to kind of miss posting these. But the end result, in my view, is the best ballpark in the major leagues.