And this is true - when it comes to how science works, MLB doesn’t get it. But I’m getting ahead of myself. Let me back up … 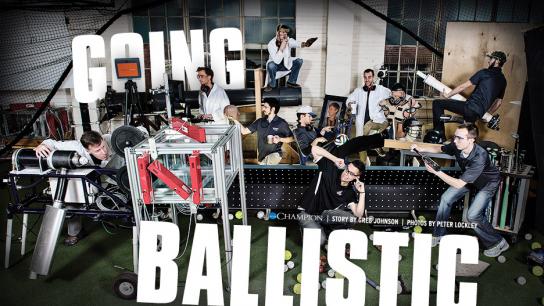 WSU’s Sports Science Lab performs bat and ball certification for NCAA, NFHS, USA Softball, and a host of other organizations. What sets SSL apart is their custom built equipment for measuring bat and ball performance.

This place is really cool. They shoot balls out of cannons and measure aerodynamic properties with laser beams. It’s freaking awesome.

If possible, the folks at SSL get even more awesome: they are responsible for calibrating the Trackman and Chyron Hego cameras responsible for Statcast’s data collection. Yes, I met a dude who went to all 30 ballparks before the season started to calibrate their systems. I immediately rethought my entire life path and decided I had failed miserably.

But hey, you want to talk about balls, don’t you?

Here’s the low down:

MLB assembled a committee last year to investigate potential differences in balls manufactured in 2014 vs. 2018. Scientists at SSL performed the trials on balls for this study. They have stated that the balls are different: the 2018 balls have reduced drag compared to the 2014 balls.

OK, the balls are different - MLB wants to change the balls so they are more like the 2014 balls - but, what do they change? This has been the issue: the committee couldn't determine what features of the 2018 balls are responsible for the reduction in drag. This isn’t because it’s an impossible question to answer - it’s because MLB rushed the study. The people at SSL said they need to conduct more trials in order to reduce the noise in the data. MLB wanted an answer before SSL was ready, so the answer they got was ‘inconclusive.’

So, Lloyd Smith (SSL Director) and Jeff Kensrud (Assistant Director and super nice guy!) have gotten MLB to give them a bunch more balls to test, until the team is satisfied with their results and can make recommendations on how to alter the manufacturing process to return to pre-2015 qualities. Kensrud wouldn’t give me any ‘preview’ into the data they’ve collected so far, but hinted that seam height may be the culprit in the great 2019 ball caper.

Kensrud did stress that MLB is committed to understanding this issue, and seemed to want me to understand how transparent MLB wishes to be on this issue. So, take off your tin foil hat Justin Verlander - no one is purposefully altering balls to increase home runs and blow up your pitching stats. MLB realizes this is an issue and wants to fix it, according to Kensrud - and he has no reason to protect them, so he seemed credible.

I hope this helps people understand what’s been happening with the inflated HR numbers this year - and, if you’re ever in Pullman, WA - I highly recommend a tour of the SSL! They don’t charge for the tour, and are serious about the science of baseball. I found it a very enjoyable experience.