... and an aerial look at the changes between then and now.

Here’s another one I had not seen before, a lovely aerial shot of Wrigley Field from an era when those types of photographs were still fairly rare.

Given the cars visible in the shot, this is immediately trackable to the 1950s. But when?

You might think this one’s impossible, but there are enough clues even with the scoreboard very difficult to read.

First, the seating area in the center field bleachers is empty and blocked off. Thus it has to date from after April 20, 1952, the date the Cardinals complained so bitterly about not being able to see the ball from the pitcher that the Cubs finally closed off that section. (It wasn’t the first time, complaints about that had come from both Cubs hitters and opponents for a decade prior.)

Second, there are no concrete panels on the outside of the ballpark. Those were installed before the 1958 season.

The marquee — in glorious blue-green! — is easier to read than the scoreboard. It clearly says “ST. LOUIS” and “SEPT” with the dates a bit harder to read. So this is a Cardinals series in September from those six years.

It wasn’t too hard to find the game after that. 1957 was ruled out because the last Cubs/Cardinals series at Wrigley that year began in August. A couple of the other years didn’t match because there were too many A.L. day games to match the board’s A.L. side, where all the games but one were shown as night games.

So I looked at the remaining sets, all on weekends. Though it’s difficult to read the city names on the board, you can see that all the other N.L. games were night games. That eliminates Sundays (no one played on Sunday night back then) and most Saturdays. So when was the curious date where some A.L. team hosted a Friday afternoon game when everyone else played at night?

The reasons this game was scheduled during the day on a Friday are lost to the mists of time, but the Yankees hosted the Washington Senators Friday, September 2, 1955. The rest of the A.L. games were at night, as was the rest of the N.L. schedule outside of Wrigley Field.

Those would appear to match. Now, let’s have a look at the rest of the clues.

There’s a number in the outs place on the board, and it looks like a “1”. So someone is batting with one out in the bottom of the eighth.

Per the play-by-play on the boxscore linked above, that would have been Lloyd Merriman, who wore No. 28. That does (mostly) look like a 28 in the batter spot on the board.

Merriman struck out in that at-bat. The Cubs won the game 12-2. Attendance was 8,160, which matches up pretty well with the number of fans you see. The Chicago Tribune archive says the weather on September 2, 1955 was sunny with highs in the upper 70s — that also appears to match the image, as well as being a good day for a plane to go in the air to take this photo.

Adam Davis, who runs that Twitter account, was kind enough to send me larger versions of both photos. Mike Bojanowski matched them up as best as possible, and so I present to you this side-by-side image. You can use the slider to see the difference: 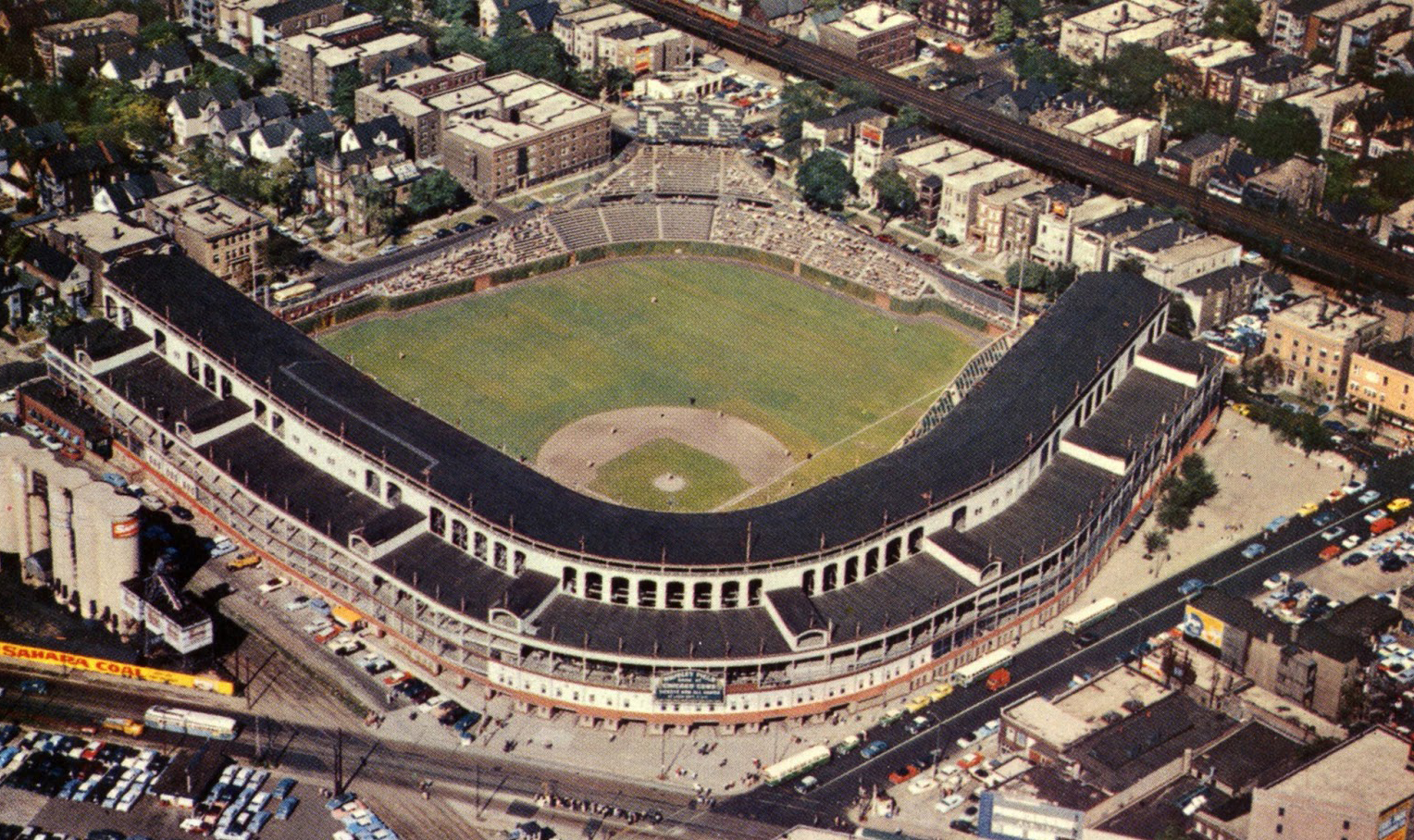 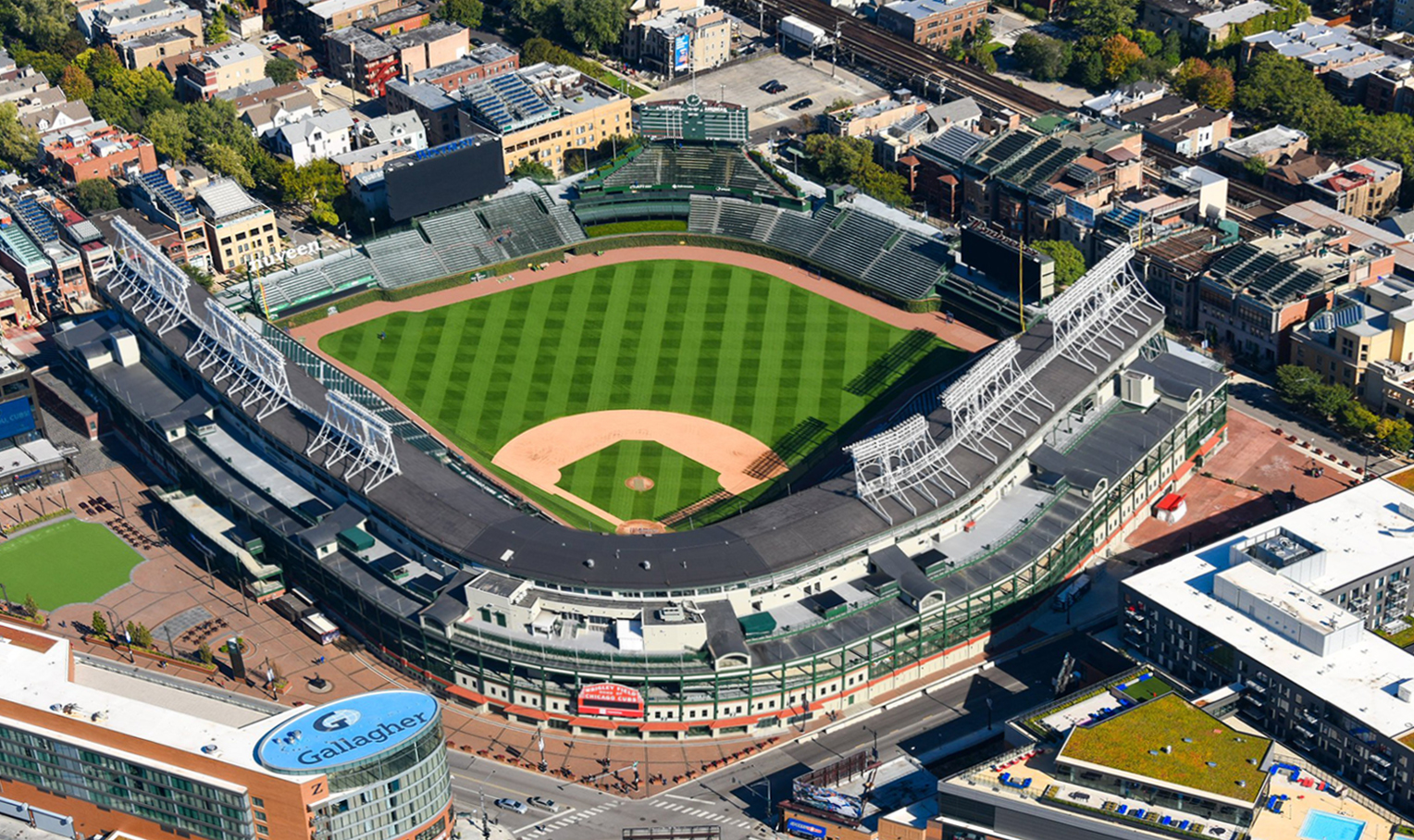 As you can see, there are quite a number of buildings that were in the area 65 years ago that still stand today. On the other hand — look at the difference next to Wrigley on the west side. The location was a coal yard in 1955, now it’s Gallagher Way. You can see one of the results of the coal yard in the buildings on Waveland. The 1955 photo shows many of them dirty and discolored from all the coal dust in the air. Now, those buildings have been cleaned up and look much better.

South of the ballpark, the new project across from Wrigley on Addison also replaced quite a number of old buildings that stood there, some of which stood until about two or three years ago. One thing that strikes me about the views inside the park is that there were almost no major changes in the ballpark from 1955 until the Wrigleys sold the team in 1981. Among other things on the field, you can see how much larger the warning track is now.

It’s a great look at Wrigley Field and shows how much has changed — and how much hasn’t — over the last 65 years.