At the end of 2019, the York Sunday News here in York, Pennsylvania, ran a two-part essay that summarized the history of York County amateur baseball, drawing on an eight-part series originally published in the York newspapers in 1940. I was curious about the original articles — I like obscure, local baseball history like that — and last summer, when I was making use of a Newspapers.com trial, I found the original article series, used Google Drive to OCR the text, and assembled from that a private ebook. The last of the eight parts talks about local York County players who had success in the major leagues, like Lefty George and, relevant to Cubs fans, Cliff Heathcote (famous for being traded from the Cardinals to the Cubs between games of a doubleheader between the two teams). Last weekend, I noticed this line:

Today, one York lad stands on the threshold of becoming a great star. Ken Raffensberger, who played with several county teams, already has acquitted himself nobly in relief roles as a member of the Chicago Cubs.

I had genuinely not heard of Raffenberger, and so I turned to the Googles. Wikipedia was a little sparse — a fifteen year career, some good quotes, a list of statistics, not a lot of flavor. His Cubs tenure, which I was interested in, was little more than dates — 1940-1941.

Raffensberg's SABR profile was much more useful. Traded by the Cardinals to the Cubs before the 1940 season, Raffenberger pitched mostly in relief for the Cubs. Then the Cubs gave up on his in 1941, sent him to the Los Angeles Angels, and he returned to the majors in 1943 with the Phillies, then after a brief stint in the Navy, was traded to the Reds in 1947. (One reason for that trade may have been his refusal to plunk Jackie Robinson.) Raffensberger was the poster child for "pitcher wins are meaningless"; his win-loss record was was more losses than wins, but his other stats were good. "[His] earned run average was usually better than average and he was a premier control pitcher," wrote Warren Corbett for SABR. 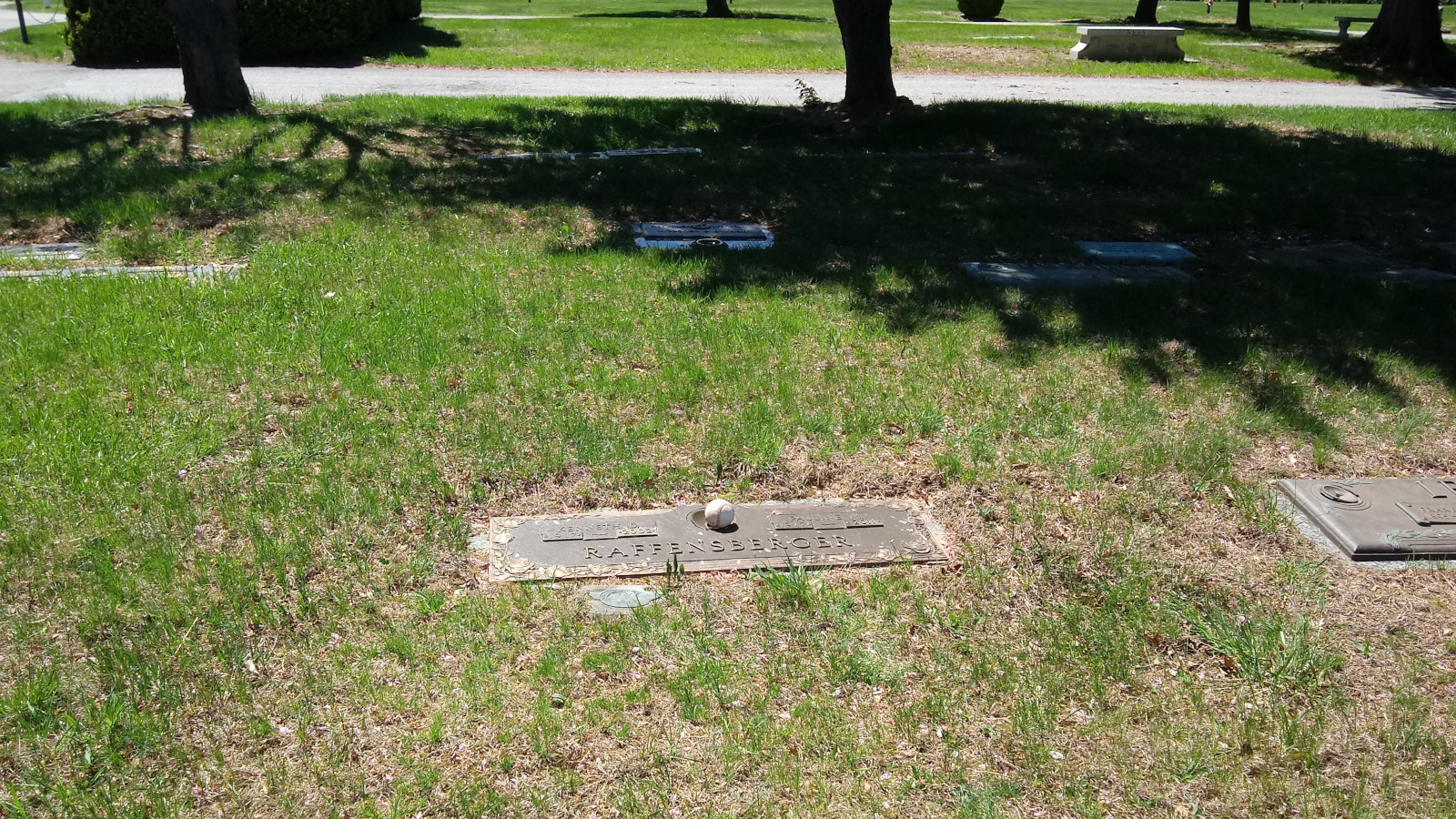 Finding Raffensberger was fairly easy, though it took some time. Find a Grave indicated which section of Mount Rose Cemetery he was in, and there was a map of the cemetery at the entrance. As I didn't know the cemetery, I thought walking the cemetery would be best, even though, by the map, he and his wife were rather far from the entrance. (By far, it's about three-quarters of a mile.) And, as I enjoy exploring cemeteries, I could look at other things, too. 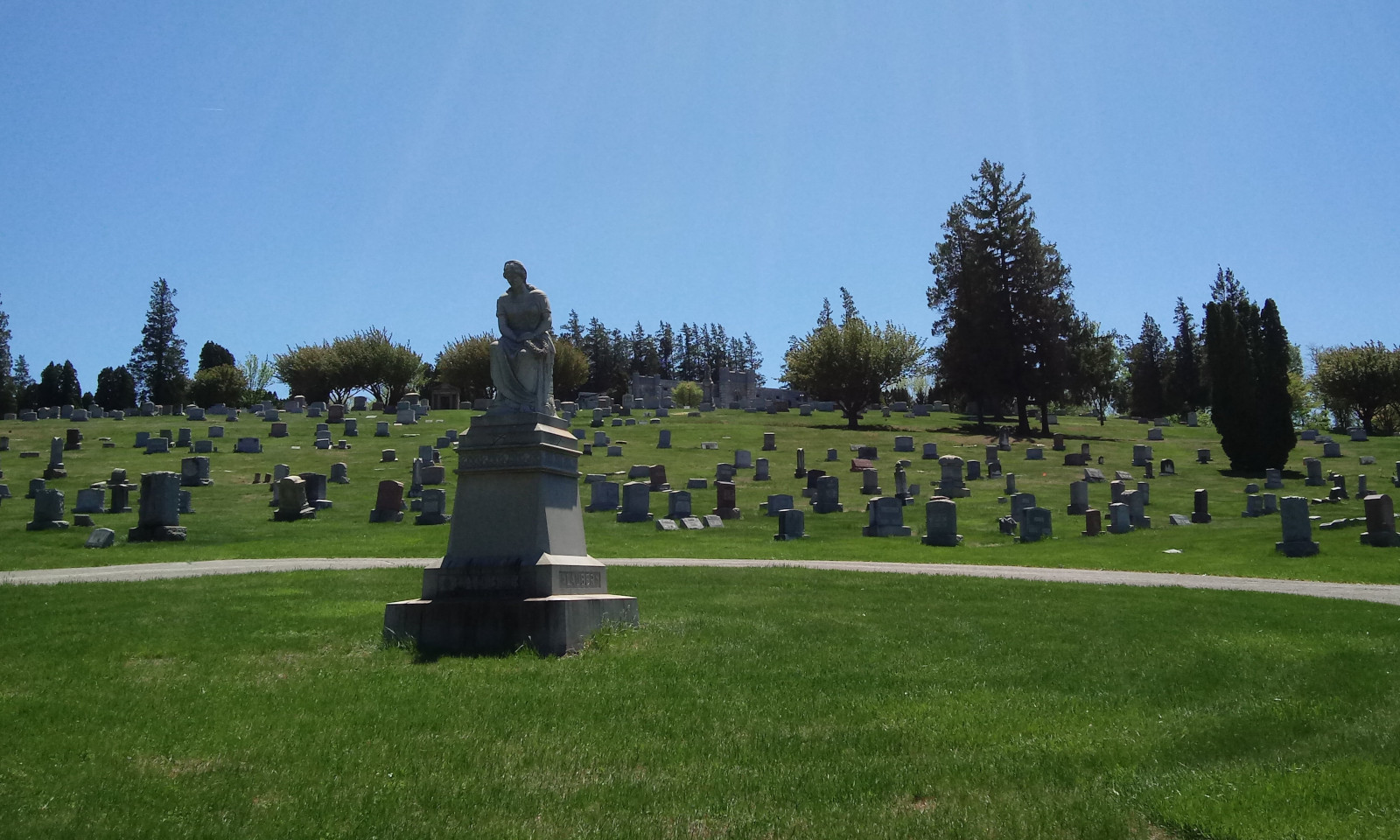 Standing at the base of the hill in Mt. Rose Cemetery

There is a massive hill at Mount Rose Cemetery, and the top of it is dominated by an impressive mausoleum. This hill is not gentle. It's rather steep, there's a road cutting across it midway up, and at that point the mausoleum, which you can see from the base of the hill, vanishes beyond the summit due to the angle. Past the road, it comes back into view. 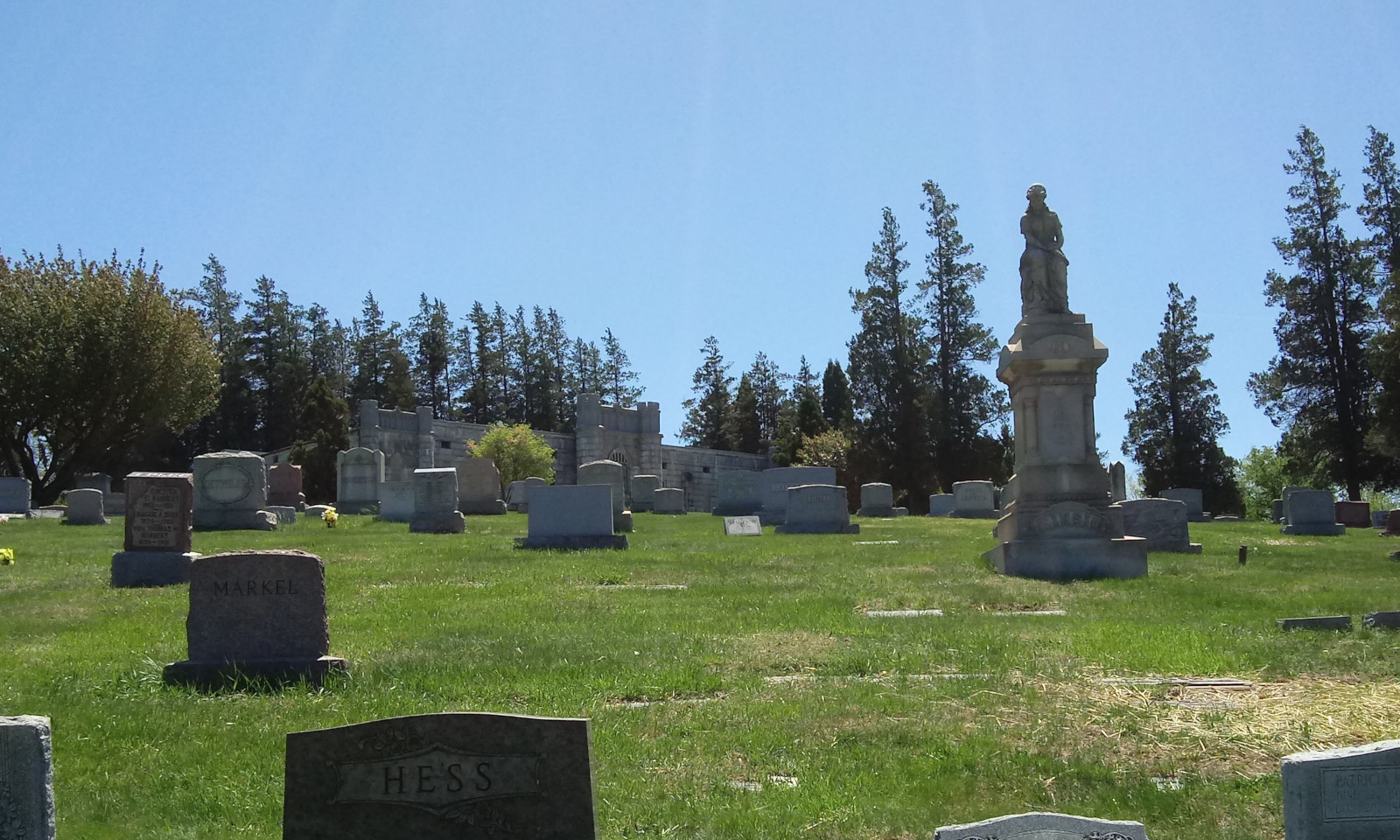 Looking up the hill toward the mausoleum

One thing I was curious about — and I brought binoculars to see — was whether or not one could see downtown York and the York Revolution ballpark from the hill of Mount Rose Cemetery. You can see for miles up there, and while I could make out a few buildings in downtown, like the courthouse and the York Central Market, I couldn't find the ballpark. One problem was that, while looking in the direction of downtown York, there were a lot of trees in the way. It's entirely possible that, absent the trees, the light towers of Peoples Bank Park would be visible even without binoculars. 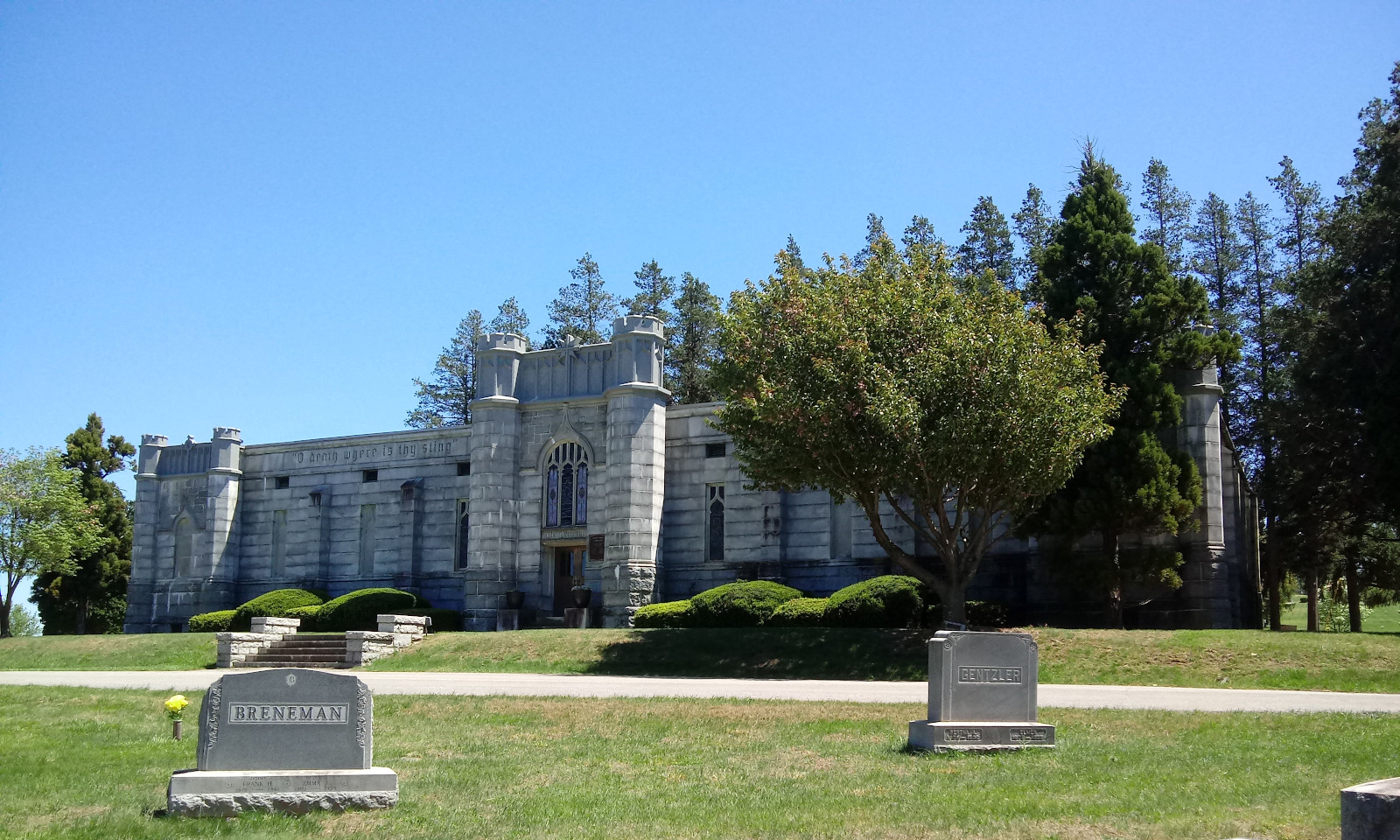 The mausoleum dominates the hill atop Mt. Rose Cemetery

Behind the mausoleum, there's a modern cemetery that eschews headstones for ground-level nameplates. There are two roads running parallel behind the mausoleum, and they come to an end at a circle a couple of hundred yards away. Walking back here feels like a completely different place — it's generally flat, it feels like a park. To find Raffensberger, you would walk down the road to the left of the two parallel roads all the way to the circle at the end and look in the corner of the section that was on your left. He's about three rows in from the road and five rows from the end. 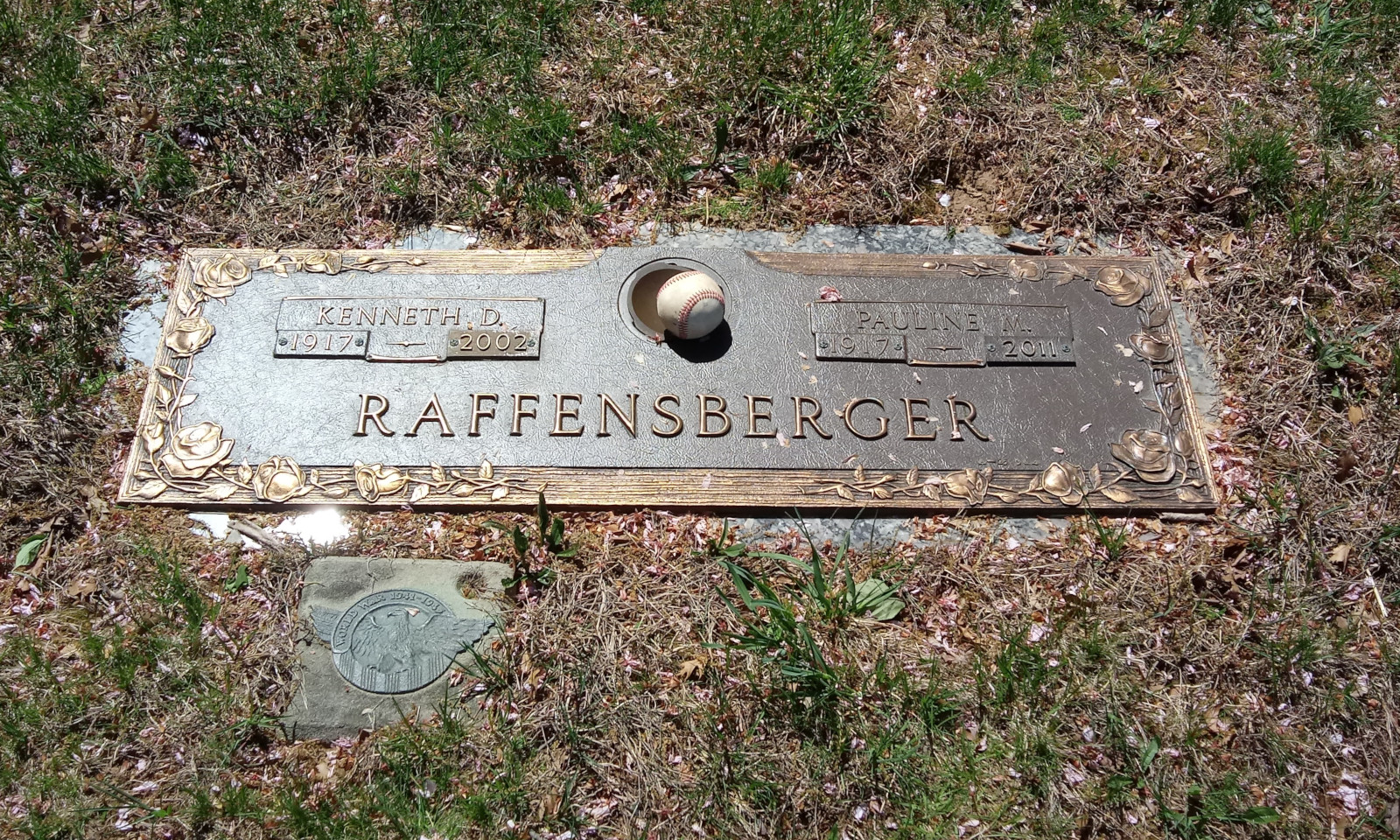 Leaving a baseball for the pitcher

I left an old baseball. What eles to leave an old pitcher?

For all I know, a breeze has caught it and it's rolled away down the hill by now.

For people in the York area, Mount Rose Cemetery is off 83's Mount Rose Avenue exit, the one that's been under construction since the Warren G. Harding administration with no end in sight. Head west into York, and it's on your left. If you go past the Domino's Pizza, you have gone too far.

Raffenberger amounts to little more than a footnote in Cubs history — heck, he doesn't even merit an appearance in Peter Goldenbock's history of the Cubs, Wrigleyville — yet, had that obscure series of old paper articles from 1940 not mentioned him as "a member of the Chicago Cubs," I wouldn't have given him any thought or gone looking for him at all. History remembers him more as a Phillie and a Red, but to me, he's a Cub.

And now I know that Cliff Heathcote, of that mid-doubleheader trade between the Cubs and Cardinals, is buried one county over. I think, sometime later this spring, or in early summer, I'll drive over and take a look and pay my respects to another old Cub.